Handout for February 5, "Choose an Effective Notation" and "Exploit Symmetry"

Next Quiz. Thursday February 12, on these two sections. 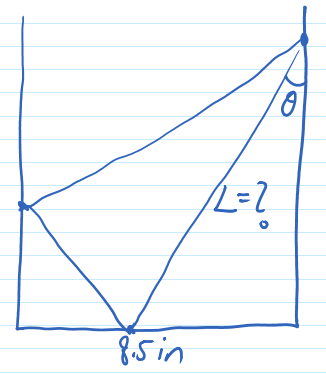 Problem 1 (Larson's 1.5.7). The bottom of this handout (width 8.5in) is folded up and to the left, so that the bottom right corner would align with the left edge of this page. Given the angle of the fold $\theta$, what is the length of the crease $L$? See the figure on the right.

Dror's Favourite "Choose an Effective Notation" problem is more a computer problem than a math problem, yet it is pretty and it will make us look at some pretty (and significant!) mathematics.

The Kauffman Bracket $\langle D\rangle$ of a knot diagram $D$ is defined by the following recursive relations:

Homework Problem (not to be submitted, yet fame for an excellent solution). Write a very short computer program that will be able to compute the Kauffman bracket (and hence the Jones polynomial) of the following three knots:

Problem 6. A function on the plane has the property that the sum of its values on the corners of any square (of any size and orientation) is zero. Prove that the function is the zero function.

Problem 7. Prove: You cannot colour the points of the plane with just three colours, so that no two points of distance 1 will be coloured with the same colour. What if you had four colours available?

Dror's Favourite "Exploit Symmetry" problem: Two players alternate placing $1\times 1$, $2\times 1$, and $4\times 1$ lego pieces on a circular table of diameter 100, with no overlaps. If a player cannot place a further piece, (s)he looses. Would you rather be the first to move of the second?